Ditch Your VAN for a Free Connection

Picture driving across the country. You’re given two options, the first is the old interstate built in the 1960s with tolls and failing infrastructure. The second is a brand-new superhighway that gets you wherever you’re going without tolls, stops, or interruptions. No one would choose the first option. By that same token, why choose to stick with your VAN?

Valued-Added Networks (VAN) began gaining in popularity in the early 60s with the invention of the Electronic Data Interchange (EDI). EDI VANs acted as a translator of sorts, giving companies an easy way to interpret and transmit data through their EDI with their partners. However, as a heavy reliance on EDI communications are becoming increasingly outdated due to the advent of cloud APIs, so too are the need for VANs.

VANs, while acting as an interpreter for a complex network of EDI connections, have some glaring drawbacks. The chief of which is an insane overhead cost determined on a “per kilo character” basis, or a fee for every 1,000 characters transmitted using a VAN. For reference, a standard tweet can be 280 characters, so VANs charge a flat fee for every 4 tweets worth of data transmitted.

Most VANs offer pay-as-you-go, monthly, or annual subscription models, but all of these models still revolve around the per-character pricing concept. So, for example, when you go for a monthly subscription, you’ll usually be limited to a certain length of characters per document. You’ll need to pay a premium the moment you exceed that limit. This can happen very quickly since most character computations include spaces and delimiters. Since your cost will vary depending on the amount of data you send, as your number of trading partners and, consequently, the number of transmissions (or size per transmission) grows, so will your costs. Before you know it, you’ll be spending thousands of dollars per month. 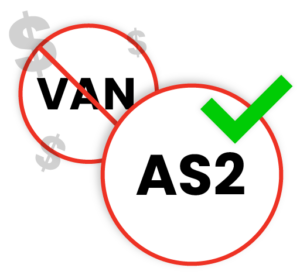 As the internet took over almost every business protocol during the turn of the century, the Internet Engineering Task Force (IETF) created AS1 or Applicability Statement 1. Shortly thereafter it was replaced with the current standard, AS2. AS2 is a modern way to transmit data between your connection broker, EDI, and partners without the drawbacks of an older, legacy VAN connection. It has one major advantage over AS1: namely, it’s free. Using an AS2 connection to unify your EDI, connection broker, and supplier network is one of the clearest ways to save thousands of dollars per month and save your suppliers the headaches of additional fees just to connect with your network.

Walmart, for example, requires all of its suppliers (which number in the thousands) to transact with them via AS2. The shift to AS2 adoption by large enterprises like Walmart, Amazon, 3M, Hyundai, Lowe’s, Microsoft, and several others has already reached critical mass and has in turn created a domino effect down to suppliers and trading partners.

Switching to a more modern AS2 approach isn’t solely about cost savings. A fully built AS2 connection also ensures that orders, invoices, inventory updates, and more aren’t lost in the shuffle simply because your VAN character limit has been reached. Don’t miss out on bulk data transmissions like hourly inventory updates just because of a legacy VAN.

Logicbroker moves retailers and brands onto the superhighway. We give our clients a frictionless run of the road and unlimited growth potential. Setting up an AS2 connection, or even a free FTP with Logicbroker, is much like establishing a connection with our advanced cloud-based API; we take care of it in the onboarding process. Let us help you figure out how best to connect with the thousands of vendors already connected to our portal and infinite others.

Stay in the loop on industry trends, insights from our team, product updates, events, and more.